Make your child’s special day meaningful with this complete guide to the meaning of upsherin.

Share in the Upsherin
of a family member
or friend

Getting your child off to a joyous start in life?
Use the day to spread joy!

Donate In Honor of My Child’s Upsherin

Your little boy turns three, and presto! He’s a card-carrying, kippah-wearing member of the Jewish nation. He gets his first pair of tzitzis, is introduced to the aleph-beis, and don’t forget his brand-new haircut. Actually, the literal meaning of upsherin is simply to “cut off,” referring to the haircutting ceremony. But to most people, the celebration on their son’s third birthday is so much more than a haircut. It’s a festive occasion marked with meaningful customs and a social event.

As soon as the child turns three, however, he leaves the state of orlah and can now learn how to observe the Torah. This is an occasion of joy, as we welcome the child into Torah and mitzvos and teach him about the joy in them.

The very first mitzvah that we introduce the child to on this day is that of peyot. Peyot is a fulfillment of the commandment not to cut the hair at the corners of the head. By cutting off the rest of the child’s long hair, the peyot are revealed, and the child assumes a Jewish appearance. He shows that he is proud of being seen as a Jewish little boy.

After the haircut, the upsherin boy dons a kippah. He’s taught that covering his head should remind him at all times that there is Someone above him, watching him. Starting to wear the kippah as a constant reminder when the child is young ensures that this knowledge stays with him for the rest of his life.

Marking the occasion of beginning to observe mitzvos with festivities leaves an impression on your little boy. He realizes that doing mitzvos is a privilege and a pleasure.

How to Plan Your Upsherin Day 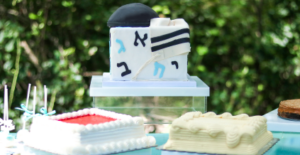 When you’re planning an upsherin, you want to think about the haircutting aspect, but don’t forget that this is your son’s third birthday party. It’s a birthday bash with a Jewish flavor. Some like to emphasize the birthday part, with lots of fun activities for the kids, but keeping it meaningful makes it special.


Personalized upsherin invitations are a great way to get the birthday party off to a great start. Upsherin-themed cards with scissors, hair, or kippah motifs can give your invitation flair, or you can add a picture of your son with his long, uncut hair for a perfect upsherin before and after easy comparison! Your guest list will usually include close family, friends, and neighbors.

As you plan the day, you might want to create upsherin centerpieces for the event. Often, the upsherin is set up as a buffet, so keep that in mind for your décor ideas. If you’ve done a scissors theme or another upsherin idea on the invitations, you can use the same motif for centerpieces as well. Some like to host an outdoor event, when the birthday is in spring or summer. Whether on your patio or in a park, nature can provide the perfect party background.

Keep the menu simple, as this usually isn’t a sit-down event. Fruit platters and salads are refreshing options, as well as finger foods, miniatures or upsherin-themed baked goods like decorated cookies or cake pops. Don’t forget the candy and snacks for the kids! These are often packaged in little goody bags, called upsherin peckelach. A fun idea that kids love, including the birthday boy, is to include a little prize in the upsherin bags. That gives his little friends a souvenir of his special day. Distributing the bags is the upsherin boy’s privilege-it makes him feel like the hero of the hour.

Be prepared with your big boy’s new kippah and tzitzis for him to wear at the upsherin and afterwards. You’ll appreciate having a good-quality haircutting scissors on hand as friends and family take turns snipping.

This is the day he’ll be introduced to the aleph-beit, the Hebrew alphabet. One custom is to smear honey on a laminated card of the alphabet letters and let the child lick it off. The sweet taste of the letters on his tongue tells him that Torah is sweet. Preparing this card in advance, as well as the honey, is a good idea.

When the big day arrives, the birthday boy usually sits on a high chair as his hair gets cut. The first snip of hair is cut from the front of the head, where the child will one day lay his tefillin. Often, that first cut is reserved for the grandfather of the child. After that, the other guests will take their turns snipping. Once all the little snips are done, it’s time for a proper haircut, usually in the barber’s chair.
Save the hair, though! A widely observed custom is to weigh the child’s shorn hair and donate the equivalent amount to charity. Others keep a charity box near the child as his hair is cut. For each snip, the child puts another coin into the box. Either way, the goal is to teach the child about yet another important mitzvah-that of charity.

Don’t forget to take lots of upsherin pictures to document your child’s new look. Attaching these to the thank-you cards that your child will send for the presents he receives gives your guests an opportunity to see his after-upsherin appearance.

Chalaka in Meron on Lag Ba’Omer
In Israel, many families perform the chalaka on Lag Ba’Omer, at the kever of Rabbi Shimon bar Yochai in Meron. During the period between Pesach and Shavuot, which is called the time of the Omer, it is forbidden to cut hair. The only day on which haircutting is permitted is the thirty-third day of the Omer, called Lag Ba’Omer.

Any little boy whose birthday is during the days of the Omer waits till Lag Ba’Omer for his long-awaited haircut. The custom to have the upsherin take place at the kever of Rashbi (Rabbi Shimon bar Yochai) dates back to the days of the Arizal, who took his little son there to cut his hair for the first time.

It’s an inspiring sight to see, as hundreds and sometimes thousands of little boys get their haircuts at the very same spot. Often, their fathers place the freshly shorn boys on their shoulders and join together in a joyous dance as they celebrate their child’s initiation into Torah and mitzvos.

There are also communities in Israel that will travel to Meron for the upsherin throughout the year, so that the haircutting is done at the gravesite of a tzaddik. Others will do the upsherin at the kever of Shimon Hatzaddik near Yerushalayim, an ancient custom in Jerusalem, or at another tzaddik’s gravesite.

Getting off to a Great Start
Your child’s upsherin is the day that your child passes an important stage of growing up. He stops being a toddler who needs constant care, and becomes a child who understands what he is taught. Like all transitions, this day comes along with so many upsherin prayers and hopes.
May my child grow up to be an asset to his family and the world around him. May he have a blissful childhood and a successful life. And may he always be as excited to perform mitzvos as he is on this day.

It’s wonderful to see your little boy growing up just a bit more. Here’s to celebrating many more joyous occasions in his life!

Donate In Honor of My Child’s Upsherin